On September 3, the 18th Xunshi Optical Fiber Communication Market and Technology Symposium was successfully held in Shenzhen. Dr. Sun Min, a senior expert of Tencent Network Architecture Center, was invited to give a speech at the meeting. Dr. Sun Min published in the speech. Views on the needs, evolution, chips, and future challenges of next-generation data center interconnect technologies. 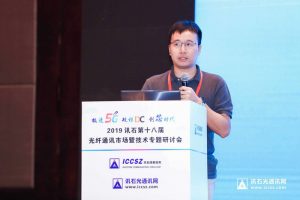 Dr. Sun Min first introduced the development history of optical communication in OTT. The first generation of optical module application should be 10G/40G module in the data. At this time, the demand for optical module is very simple, mainly storing data and binding with the system set.  With the development of data center scale and standardization, large-scale application of optical modules has been promoted. At this time, 40G and 100G switching has occurred, and system white boxing and standardization have emerged, and optical modules and systems have been decoupled.  In the period of the third generation data center, the data center was built on a large scale, and the business model was diversified. The organization of the system self-research and the development of the optical module industry standard appeared. As 100G modules began to be used in data centers, some companies began to build their own optical system teams. The fourth-generation data center entered the era of commercial competition, and its performance was cloud business competition. Cloud business competition is a process from buying to selling, and the demand for suppliers is getting higher and higher.

Regarding the choice of 200G or 400G, Dr. Sun Min believes that it is not controversial, and ultimately depends on the needs of the business. The advantages of 200G can be used in QSFP package, the optical chip is more mature on 5G PAM, the power consumption of the electric chip is lower, the switch chip is based on 50G PAM4, the system transmits transparently, and the delay is lower than 100G PAM4. The choice of 200G or 400G mainly considers several decisive factors: first, cost, including end-to-end cost, and cost of power consumption. The second is business needs, broadband, latency, and network stability. The third is the system hardware, the traction and limitations of the system hardware.  The last one is infrastructure needs.

The challenge of bandwidth growth facing data centers. Dr. Sun Min said that the first is the copper line facing challenges. The increase in bandwidth needs to meet low power consumption, low latency, and low cost. The copper cable is relatively thick, and the wiring is relatively difficult. The weight of the copper cable is also a major challenge for the load bearing of the equipment room. At the same time, it is necessary to consider the mechanical stress of the connector port and the signal transmission distance of the copper wire become shorter and shorter.

Dr. Sun Min mentioned that 400G can significantly reduce the cost per Gbit and can reach below 1$/Gbit. In April this year, Tencent organized the first domestic 400G joint test to promote the performance and consistency of the 400G module. From the test results, the power consumption from 100G to 400G is higher, the connector type is too much, the performance is poor, and the BER is higher. So Dr. Sun believes that the true 400G is not ready yet. The 100G system is upgraded to 400G, and there is a coexistence scenario with 400G, and the state of 100G DR1 and 400G DR4 is interconnected.

For the future development of 400G, Dr. Sun Min believes that the technological breakthrough of optical chips will become a bottleneck within a certain period of time, and 100G/lane will become the mainstream for a long time. The 800G module is easier to implement on the existing 400G module architecture. Future opportunities and challenges include core standards development, SiP core resources and technologies (Foundry, core chip design), and light source chips. The optical connector industry is not affected; the layout of core optoelectronic chips and processes; cost.