According to the latest issue of Nature, a research team led by the University of Pennsylvania School of Engineering has invented a chip, which is more secure and robust than the existing quantum communication hardware. Their technology uses “quantum code” to communicate, doubling the quantum information space of lasers on any previous chip.

Non quantum chips use bits to store, transmit and calculate data, while the most advanced quantum devices use quantum bits. Bits can be 1 or 0, while quantum bits are digital information units that can be 1 and 0 at the same time. In quantum mechanics, this simultaneous state is called “superposition”. The quantum bit whose superposition state is greater than two energy levels is called quantum code, which can exist in multiple states such as 0, 1 and 2. 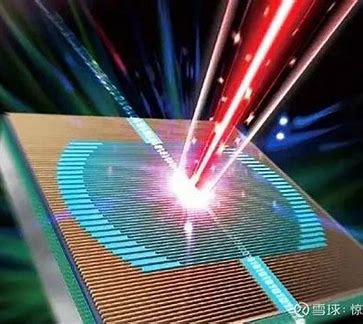 Due to the superposition of only two energy levels, the storage space of quantum bits is limited and the tolerance of interference is very low.

This time, the fourth-level quantum key of the new laboratory equipment has made significant progress in quantum cryptography, increasing the maximum key rate of information exchange from 1 bit per pulse to 2 bits per pulse. The device provides four levels of overlap and opens the door for further size increases.

The researchers said that the biggest challenge was the complexity and non-scalability of the standard settings. Although we know how to generate these four level systems, it requires a laboratory and many different optical tools to control all the parameters related to dimensional increase. Now, they have achieved this on a single chip.

Quantum communication uses photons in a strictly controlled superposition state. Attributes such as position, momentum, polarization and spin exist in the form of multiplicity at the quantum level, and each attribute is determined by probability. Only when we detect, observe or measure, can we determine the specific properties of quantum systems in an instant.

This super dimensional spin orbit micro laser is based on the team’s early use of vortex micro laser, which can sensitively adjust the orbital angular momentum of photons. The latest devices upgrade the capabilities of previous lasers by adding another level of command to the photon spin. This additional level of control can manipulate and couple orbital angular momentum and spin, enabling the research team to generate a fourth-level system.

The difficulty of controlling all these parameters at the same time has been the reason that hinders the generation of quantum lasers in integrated photonics, and is also the main experimental achievement of the team’s work.

Researchers say that the quantum state of photons can be thought of as two planets stacked together. Previously, there was only information about the latitude of these planets, but now there is also longitude, which is the information needed to manipulate photons in a coupled way and increase dimensions, so that they can be stacked into four levels.