It was expected that the epidemic of new crown pneumonia will come to an end, but recently there have been changes in the number of confirmed diagnoses in various countries, which has negatively affected the global economy and the chip market. The research unit IC Insight decided to revise the estimated sales of chips this year. Trend Force also said that the growth of IC sales this year may slow down, which is not as good as expected at the end of 2019. 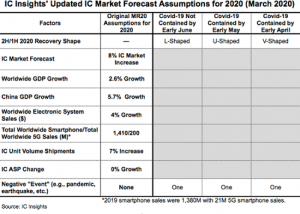 Following the 2019 chip market growth rate has dropped significantly; most people speculate that the growth rate will pick up this year. IC sales in January 2020 did increase by 30% compared to the same period last year, so IC Insight then predicted that the IC market in 2020 would grow by 8%.  However, most foundries in the industry are located in Asia severely affected by the new crown epidemic, and the European and American regions are also affected by the epidemic. The growth of the IC market may slow down.

Figure shows that if the epidemic is controlled in April, May and June, the IC market will have a corresponding development curve. Source: IC Insight

TrendForce analysis shows that among the three major manufacturers in the world, TSMC’s 7nm node ordering status remains stable, and only 12 / 16nm node casting requires slight correction.  Samsung expanded the use of EUV and promoted the 8nm product line in order to increase the revenue share of advanced processes. However, due to the severe impact of the South Korean epidemic, the decline in market demand may affect first-quarter revenue. Global Foundries continues to expand its 5G, MRAM, and automotive product lines with 22FDX and 12nm LP + processes. Although the plant with ON Semiconductor has established an agreement to ensure order revenue from 2020 to 2022, However, all the plants sold to the world’s advanced Singapore factory were settled, which is expected to have a more direct impact on the first quarter.