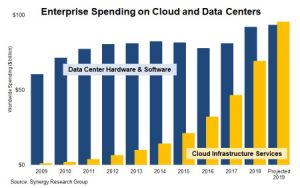 Although server shipments were flat in 2018, due to richer configurations and higher prices, enterprises’ data center spending increased in 2018. At the same time, corporate spending on the cloud has not declined, and then again increased by nearly 40% in 2019. Throughout the decade, the average annual growth rate of enterprise data center expenditures was 4% (the increase was mainly the first three years), while in cloud services, the growth rate was 56%. In 2019, for the first time, companies will spend more on cloud services (IaaS, PaaS, and hosted private clouds) than they spend on data center equipment.

Based on actual expenditures from the first quarter to the third quarter and forecasts for the fourth quarter, Synergy estimates that global enterprise data center software and hardware spending in 2019 will exceed $ 93 billion. In the past decade, the fastest growing major market segments are virtualization software, Ethernet switches, and network security. The share of server spending in software and hardware spending across the data center has remained stable, but the share of storage spending has declined. At the same time, Synergy expects companies to spend $ 97 billion on cloud infrastructure services in 2019. In ten years, the main market segments with the highest growth rates were databases, IoT, and analytics in PaaS. The share of IaaS spending remained stable, and the share of managed private cloud services spending declined.

John Dinsdale, chief analyst at Synergy, said: “In the past ten years, computer capabilities have increased dramatically, enterprise applications have become increasingly complex, and the amount of data generated and processed has skyrocketed, suggesting an increasing demand for data center capacity. However, servers now sold more than half are entering the data center of the cloud provider, not the enterprise. In the past ten years, we have seen a huge shift in the IT market. Enterprises now spend nearly $ 200 billion annually on purchasing or accessing data center facilities, but the cloud businesses have become the main beneficiaries of this spending. ”

According to Synergy data, at this stage, hyper scale cloud providers, enterprises, and service providers invest more than $ 150 billion in data center hardware and software annually. In the first three quarters of 2019, cloud providers such as AWS, Google, FB, and Alibaba have invested 33% of the overall market in software and hardware of the data center (15% five years ago). Moreover, as the demand for public cloud services continues to grow and social networks continue to grow strongly, hyper scale operator spending will continue to rise. At the same time, corporate workloads are still under pressure as workloads continue to shift from private networks to public clouds.  This means that the investment proportion of hyper scale cloud providers will continue to rise in the future.