According to foreign media reports, Thierry Breton, the EU’s internal market commissioner, said on Wednesday that he believes that Huawei has no ulterior motive for donating masks to the EU.  He pointed out that solidarity is the best way to respond to a global coronavirus outbreak. 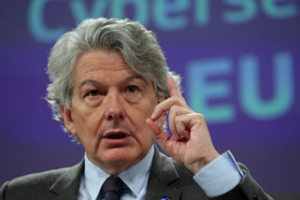 Erry Thierry Breton was the former Minister of Economy of France, the former CEO of French telecommunications operator Orange and IT giant Atos, and was approved by the European Parliament to be appointed Commissioner of the European Union’s Internal Market.

According to the report, Huawei, the world’s largest Chinese telecommunications equipment manufacturer, has provided millions of protective masks and gloves to Italy, Spain, the Netherlands, Lithuania, Poland, Greece and Switzerland, which has also attracted criticism from some people.

Critics say that Huawei’s donation of masks to Europe has been called “mask diplomacy” by some, a move that could be a strategy aimed at winning lucrative 5G contracts.

It is reported that in January of this year, the European Union announced 5G guidelines prohibiting Huawei from participating in core infrastructure network construction.

Thierry Breton disagreed with it. He said the donations were by no means seeking returns.  “Absolutely not. I’ve been a CEO myself, and I know it’s not the case,” Thierry Breton said.

Erry Thierry Breton pointed out that if the government where the company does business seeks help, the CEO has an obligation to help. Thierry Breton said that no CEO will make such a donation because he wants to be rewarded.

At the same time, he pointed out that with the outbreak of bird flu in China, European companies with subsidiaries in China also made their own contributions.

It is reported that Thierry Breton originally hoped to visit China in January to provide assistance, but was limited by safety and security issues.

Nevertheless, he said that instead of arguing who does more, it is better to work together to deal with the crisis. “Only if we are united, people are united, nations are united, a continent is united, and continents are united, can we overcome the current epidemic,” Thierry Breton emphasized.