Home/Blog/ARPU Trending down after Brief Revenue Boost from 5G

ARPU Trending down after Brief Revenue Boost from 5G

South Korea is seen as one of the world’s leading 5G markets, its operators have launched the world’s first 5G services, and the early results of 5G development in the local market are encouraging– Korean users have shown great enthusiasm for 5G mobile phones and services. The acceptance has propelled South Korean operators to a revenue peak that is the envy of the rest of the world. 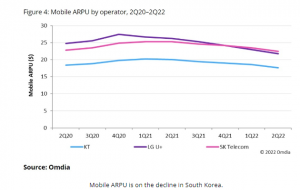 However, a new recent report from market research and consulting firm Omdia shows that the ARPU of South Korean telecom operators is now declining after a brief boost in the commercial rollout of 5G technology.

Omdia analyst Anshika Gandotra wrote in the report: “After two years of consistent growth, mobile ARPU of Korea Telecom (KT) and LG U+ has resumed decline, while SK Telecom has remained relatively flat, but its 5G subscriber growth and revenue growth have stalled.”

The analyst noted, “Initially, the rollout of 5G stopped the ARPU trend of falling. However, mobile ARPU has been declining since the first quarter of 2021. Mobile operators have made various efforts to meet the different needs of customers SK Telecom has started offering a new 5G package plan– an online-only mobile package plan with 30% lower tariffs. In addition, LG U+ has also reduced 5G package tariffs. South Korea has seen early signs of a maturing 5G market as high-end Users have already upgraded to 5G services. Other customer groups seem less willing to upgrade at the moment, slowing 5G growth.”

In the U.S., T-Mobile US is on the upswing in its ever-expanding 5G network, but Verizon continues to struggle in 2022. In fact, Verizon is now forecasting three consecutive quarters of declining customer numbers in its massive mid-band 5G rollout.