Home/Blog/2019 Global Optical Module Market Fell 4%. Can Double-Digit Growth be restored in the Next Five Years?

2019 Global Optical Module Market Fell 4%. Can Double-Digit Growth be restored in the Next Five Years?

In a recent report, LightCounting (LC) predicted that the global optical transceiver market will grow at a compound annual growth rate of 15% from 2020 to 2024, similar to the market growth rate recorded in 2010-2016 (as shown in the following figure). 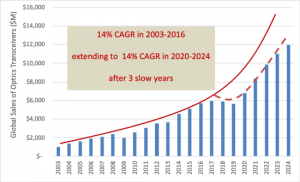 After the market growth in 2017-2019 is three years slower than expected, this forecast may now look too optimistic, but the forecast may happen if:

First, the 5G deployment will proceed as expected, driving the demand for wireless forward opticals in 2020 and beyond to a new record. Second, shipments of next-generation Ethernet modules, including 2x200GbE, 4x100GbE and 400GbE, will reach significant levels by 2020.  Finally, the price decline in the Ethernet market will return to the historical average of 15-20% per year, instead of 35% in 2018. The latter led to a 15% increase in supplier revenue in 2018. The last point is crucial for the growth of the market in 2020-2024. Ethernet is already the largest market segment in the global optical transceiver market and is expected to account for 60% by 2024.

Although people are worried about the escalation of trade war between China and the United States, at the end of 2018, the industry is still looking forward to improving in 2019. The good news is that the impact of the trade war was not as serious as expected in 2019. The ban imposed by the US government in May 2019 prohibiting the sale of US-made products to Huawei has caused an impact on the entire supply chain. However, optical and integrated circuit suppliers did not take a long time to figure out how to continue to ship products to Huawei, and the ban was not as extensive as feared. Sales of WSS modules, tunable lasers, modulators and coherent receivers exceeded market expectations in 2019, in part because Chinese customers, including Huawei, carefully accumulated more inventories to prevent US sales of US-made products. Further restrictions are imposed.

The bad news for 2019 is that the large-scale deployment of next-generation Ethernet transceivers has been delayed until 2020. Facebook announced their plans in March 2019 to continue to choose 100GbE and transition to 200GbE between 2020 and 2021. Amazon began deploying 4x100GbE DR4 transceivers in mid-2019, but the project was postponed until 2020 due to performance issues with the PAM4 DSP chip. Google continues to deploy 2x200GbE, but the number is still limited.  Alibaba postponed the deployment of the 400GbE module to 2021, due to the overall slowdown in Chinese consumer spending, which led to a decline in its business growth rate. As service providers need more time to evaluate new products, their new core routers’ demand for 400GbE is also weaker than expected in 2019.

After the overall market development has been slower than expected for three years, it is time to catch up with all of these plans.